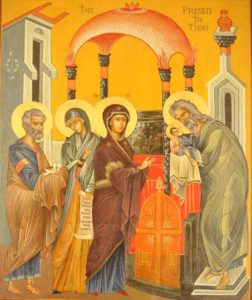 “The Presentation of Our Lord” parish is named for the day when Joseph and Mary brought Jesus to the temple to be dedicated to God according to Jewish tradition.

Orthodox Christian immigrants from Romania founded our parish in 1914, on Akron’s south side. We moved to Fairlawn in 1972.

Locally, our parish is led by the Very Reverend Father Ian G. Pac-Urar, Reverend Deacon Wayne Paul Wright and a Parish Council that administers our programs and finances. Fellowship groups provide special programs and activities for specific ages and interests. Sunday morning and occasional Christian Education programs serve children and adults of all ages through the year.

We’re a small, loving community of worshipers with a very important message to share: the peace, love and joy of Our risen Lord and Savior, Jesus Christ!

Education is the second ministry of a parish, after worship. At Presentation, a Church School provides instruction in the Orthodox Christian faith to students from early childhood through High School. A variety of evening programs is offered to adults, depending on needs and interests.

Our Church School is held immediately following reception of Holy Communion. Students from Kindergarten through High School receive instruction in the Faith from our dedicated volunteer staff.

Presentation is blessed to have a full cadre of servants at the Holy Altar. In addition to the Priest, Deacon, subdeacons and readers, a team of young Altar Servers completes the dignity and beauty of our Divine Liturgy and other Divine Services.

When a young man is ready and wanting to serve at the Holy Altar, he spends a period of observation and preparation under the guidance of a subdeacon. After several months, usually just before the Feast of the Nativity or Holy Pascha, the new altar server is received with a prayer and blessing. He is robed in the presence of the other servers and the entire congregation and begins a period of service that often lasts into young adulthood.

The members of Ak-ROY can be found in every corner of our parish family life. They sing in the Ion Vidu Choir, they serve at parish banquets, volunteer for service projects, and raise funds for the work of the Church. Through it all, they enjoy the fun and fellowship that is part of being young! Come and join this energetic, faithful and steadfast team of our youngest members!

The “Ancestral Faith” (Credința Stramoșeascǎ) Ladies” Auxiliary has been active since the first days of Presentation. Their work extends from traditional kitchen and meal preparation activities to charitable works in the community and leadership roles in the Episcopate.

St. Paraschiva is the patron of the Ladies’ Auxiliaries throughout our Episcopate.

The members of “Ancestral Faith” enjoy a bond of fellowship that carries through their lifetimes and across generations. Come and be a part of this loving, giving and vital sisterhood!

Deacon Wayne was ordained in 2004 by His Eminence Archbishop Nathaniel. He came to Holy Orthodoxy upon his marriage to Lenora Grossmayer, who grew up at Presentation. They have two adult children and eight grandchildren.

Deacon Wayne has served Presentation as President and Treasurer of Parish Council, and as representative to the Council of Orthodox Churches of Akron. A Marine veteran, he is active in the American Legion, where he has held a variety of District and State level offices.

In 2010 Deacon Wayne was asked to lead Presentation”s outreach efforts to the veteran community of Summit County. In 2012 Deacon Wayne became State Chaplain for the Ohio American Legion. He also serves the Summit County Honor Court.

Deacon Wayne received his Diploma in Orthodox Theology from the St. Stephen’s Program of the Antiochian Orthodox Christian Archdiocese.

Father Ian was born in Montreal, Canada, lived in California and Ontario, and came to Ohio in 1980 when he married Mary Lynn Streza of Canton. He and Mary Lynn came to Presentation in February 1992.

Mary Lynn is a native of Canton, Ohio and grew up in the parish of St. George the Great Martyr. Mary Lynn sings in the Ion Vidu Choir, is active in the Credinta Stramoseasca Ladies” Auxiliary and teaches in the Church School, where she also has served as Director. We call her “Can-Do Mary Lynn!” In addition to being our preoteasa, Mary Lynn is a practicing attorney specializing in Immigration and International Adoptions, and serves as Legal Counsel to the diocese.

While teaching in Ohio schools, Father Ian was ordained to the Holy Diaconate by (then) Bishop Nathaniel on September 25, 1988 and served the parish of St. George the Great Martyr as Deacon from 1988-1992. During his twentieth year of teaching and training future teachers, Father Ian was called to the Holy Priesthood and ordained by Bishop Nathaniel for service at Presentation on January 19, 1992.

Father Ian has served the Church in many capacities. He has been a member of the Episcopate Council for most of his tenure as a deacon and priest. He is President of the Episcopate Courts and Chair of the Department of Religious Education. He is also a member of the Department of Missions and the Joint Dialogue Commission. In 2000, Father Ian and His Eminence Archbishop Nathaniel together founded the Center for Orthodox Christian Studies (St. Andrew House) in Detroit, Michigan. Since 2004, Father Ian has directed the annual Clergy Confertreat and the occasional, New Clergy Institute.

In 2007 Father Ian was elevated to the rank of Archpriest by the Holy Synod of the Orthodox Church in America. In 2008 Father Ian received a Pectoral Cross from His Grace Bishop Irineu for his work on the Joint Dialogue Commission. In 2012 Father Ian was awarded the Bishop Policarp Medal for his service to the Romanian Orthodox Episcopate of America. Father Ian was educated at the University of Windsor, Kent State University, Case Western Reserve University and the Antiochian House of Studies. He was granted the Doctorate of Philosophy in 1995.