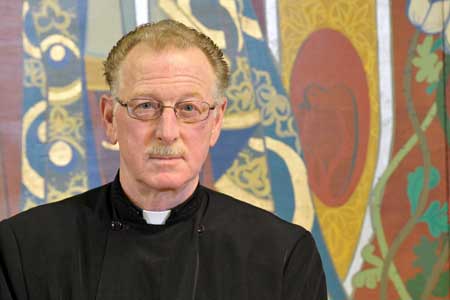 Father Wayne was ordained to the Holy Diaconate in 2004 and to the Holy Priesthood in 2021 by His Eminence Archbishop Nathaniel. He came to Holy Orthodoxy upon his marriage to Lenora Grossmayer, who grew up at Presentation. They have two adult children and eight grandchildren.

Father Wayne has served Presentation as President and Treasurer of Parish Council, and as representative to the Council of Orthodox Churches of Akron. A Marine veteran, he is active in the American Legion, where he has held a variety of District and State level offices.

In 2010, then Deacon Wayne was asked to lead Presentation”s outreach efforts to the veteran community of Summit County. In 2012 Deacon Wayne became State Chaplain for the Ohio American Legion. He also serves the Summit County Honor Court.

Father Wayne received his Diploma in Orthodox Theology from the St. Stephen’s Program of the Antiochian Orthodox Christian Archdiocese. He is attached to Presentation and serves various parishes of the Episcopate at the direction of the Diocesan Bishop.