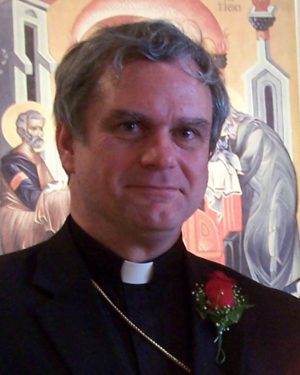 Father Ian was born in Montreal, Canada, lived in California and Ontario, and came to Ohio in 1980 when he married Mary Lynn Streza of Canton. He and Mary Lynn came to Presentation in February 1992.

Mary Lynn is a native of Canton, Ohio and grew up in the parish of St. George the Great Martyr. Mary Lynn sings in the Ion Vidu Choir, is active in the Credinta Stramoseasca Ladies” Auxiliary and teaches in the Church School, where she also has served as Director. We call her “Can-Do Mary Lynn!” In addition to being our preoteasa, Mary Lynn is a practicing attorney specializing in Immigration and International Adoptions, and serves as Legal Counsel to the diocese.

While teaching in Ohio schools, Father Ian was ordained to the Holy Diaconate by (then) Bishop Nathaniel on September 25, 1988 and served the parish of St. George the Great Martyr as Deacon from 1988-1992. During his twentieth year of teaching and training future teachers, Father Ian was called to the Holy Priesthood and ordained by Bishop Nathaniel for service at Presentation on January 19, 1992.

Father Ian has served the Church in many capacities. He has been a member of the Episcopate Council for most of his tenure as a deacon and priest. He was President of the Episcopate Courts (Consistory and Tribunal) and Chair of the Department of Religious Education. He was also a member of the Department of Missions and the Joint Dialogue Commission. In 2000, Father Ian and His Eminence Archbishop Nathaniel together founded the Center for Orthodox Christian Studies (St. Andrew House) in Detroit, Michigan. Since 2004, Father Ian has directed the annual Clergy Confertreat and the New Clergy Institute. He is presently the Juridical Referee for the Romanian Episcopate.

In 2007 Father Ian was elevated to the rank of Archpriest by the Holy Synod of the Orthodox Church in America and received. In 2012 he was awarded the Bishop Policarp Medal for his service to the Romanian Orthodox Episcopate of America and work on the Joint Dialogue Commission. Father Ian was educated at the University of Windsor, Kent State University, Case Western Reserve University and the Antiochian House of Studies, being awarded the degree of Doctor of Philosophy in 1995.